“This 730hp supercharged street MONSTER headed south of the border to race everything and everything! Texas Streets Boosted Nights features some of the most insane racing, but nobody lined up against as many cars as Sketchy Vert! Mustang, Corvettes, GT-R’s, LSx Willy’s Jeep…you name it! This poor LSx got abused during it’s week in Texas, but didn’t let up one bit! The Procharger bolted to this Trans Am helps push it down the street…most of the time going sideways down the interstate!” 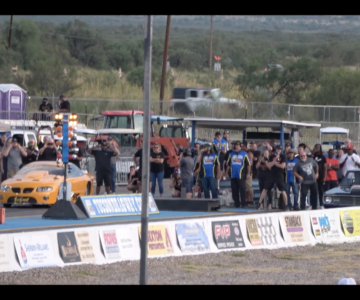 Jeff Lutz did not come to the desert to play around…Watch as he wheels his way through he field to a crazy final with Justin Swanstorm!

“In this video we were in tucson, Arizona where the next no prep race was held at. This time around we got jeff lutz where drew the lucky team attack chip. This means jeff lutz went on to represent the 405 in an all out team race for fifteen thousand dollars. Jeff Lutz would represent the 405 team with his twin turbo yellow gto. Jeff Lutz had a wheel come off on the last race in idaho but in this race he came back with a vengence. Jeff Lutz was taking names and crushing the competition which was one fast field. In the finals of the team attack race was against the always threatening Justin Swanstorm. Swanstorm is one tough customer to beat and jeff lutz would make the race look easy.” 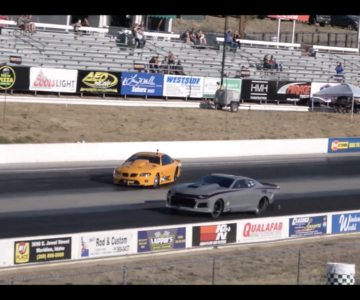 Jeff Lutz had one interesting weekend at Frirebird Raceway for the Street Outlaws/NPK event. Lutz had to display some crazy wheel skills trying to save his GTO after the rear wheel almost snapped off completely. Im sure he grew a couple new grey hairs after that scary ride!
“In this video we have jeff lutz who drives the twin turbo gto. The Gto is the replacement car for the yellow 57 chevy he wrecked in the fastest in america show last year. Jeff Lutz is a master mechanic and can fab up many things that seem not to fit , to fit again. Jeff built this gto well and performs well in the no prep series. Jeff Lutz entered the big tire class at the firebird raceway no prep event and faced off against the Ryan Martin’s Camaro. The two racers were grudging each other to see how fast they can go on the sketchy surface. Jeff Lutz took off the line and had a wheel break which cause the car to go in a one eighty turn. Jeff did a great job of saving the car in the most dramatic fashion to a safe stoppage. Jeff Lutz is a driving legend that came out unhurt and managed to fix the car to race the next day. These no prep racers don’t quit to put up a great show for the fans.”