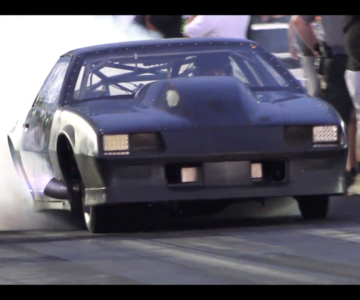 180 mph into a wall and the dude walks away!? This guy has some serious good luck on his side, listen to the story of the “Louisiana Nightmare” crash.

“In this video we have the Louisiana Nightmare which is a procharged Camaro. The driver of the louisiana nightmare was involved in a crash recently. The driver re-tells the story that happened that night he crashed his procharged camaro into a wall going one hundred and eighty miles per hour. His seat belt got undone and moved the driver from the left side of the car to the right side. This did not deter this ex-marine from rebuilding the car in time for the biggest no prep race in oklahoma. The tells us that he has no quit in him and judging from his performance on the no prep race he was right. He was doing extremely well during the big tire class and took on some fast cars. One of the cars he faced off with was the flatliner procharged camaro. One clean looking camaro that had been running hard all weekend and he faced off with the louisiana nightmare in a good race.”

“This video features a 707HP Chevrolet Corvette C7 Z06 tuned by BBM Motorsport and equipped with a very loud custom build Capristo exhaust with fully variable exhaust system, where you can open and close the valves! Under the hood you will find a Supercharged 6.2L aluminum V8 upgraded to 702HP! This Z06 is also equipped with aftermarket carbon parts and 19inch OZ Ultraleggera wheels! ”