That was one HOT pass! This is why it is imperative that your safety equipment is correct and up to date!

“In this video we have have the main reason why fire safety important. This race took place at bandimere raceway in Morrison, Colorado. This matchup was a small tire race between Justin Wills twin turbo nova and Varni’s turbo fox body mustang. These two cars entered the small tire race and the first race between them was a grudge match. The grudge match is basically to gather data for eliminations. Later that evening the two racers would eventually face off again but this time in the finals of the small tire class for seventy five hundred dollars. But, Varni’s fuel cap came off which ignited a fire under the hood and the smoke went into the cabin quickly. So Varni shut the car down and ran to safety. The racer had a full fire resistant suit which allowed him to be safe for all fire related situations. The situation is a good example to why a racer should wear safety equipement. It was the best case situation where everyone walked away safe due to the right equipement and crews doing their job. Racers look at the racer’s catalog to purchase safety equipement because it is very important. ” 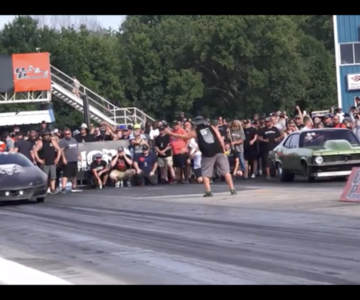 Brent Self of “Black Sheep Mafia” brought his Procharged Camaro out for some fun at Outlaw Armageddon 7. The newly wrapped Camaro had its hands full in the small tire class but managed get it done!

“In this video we have brent self from Louisiana driving a hemi procharged setup on a camaro. The camaro is on small tires as he entered a forty plus field of small tire cars at outlaw armageddon. The camaro did extremely well on the no prep surface all weekend which resulted in numerous wins for the black sheep mafia leader. The car is no stranger to sketchy surfaces and proves once again a force to be dealt with in small tire. The car recently got a cool wrap design that outlines the black sheep mafia logo on the car. With a group of team mates at every race the camaro is backed by a solid team. Great team work and fast cars makes for a great show as the camaro was the one to beat all weekend among the rest of the shark filled pool of small tire warriors. ”